St. Michael and All Angels is a haven for the arts, particularly music and the visual arts. The sound of our organ fills the church at the high mass, accompanied by choir and congregants alike. Hand-crafted linens, antique paintings and more can be seen in the sanctuary, overseen by an icon of St. Michael. Paintings, photographs, statues and banners can be found all over campus, and a full-sized labyrinth invites visitors to take a meditative walk. Guest musicians, dancers, and even the occasional film crew have been known to turn up, and the School’s students contribute their own artwork and performances.

Music is a major part of worship at St. Michael and All Angels. Most services have some music, whether it be the full choir accompanying our Æolian-Skinner Pipe Organ at the 10:30 AM mass, or the congregation singing to a guitar at our Mass in Spanish. Guest musicians often participate during Christmas and Easter celebrations. 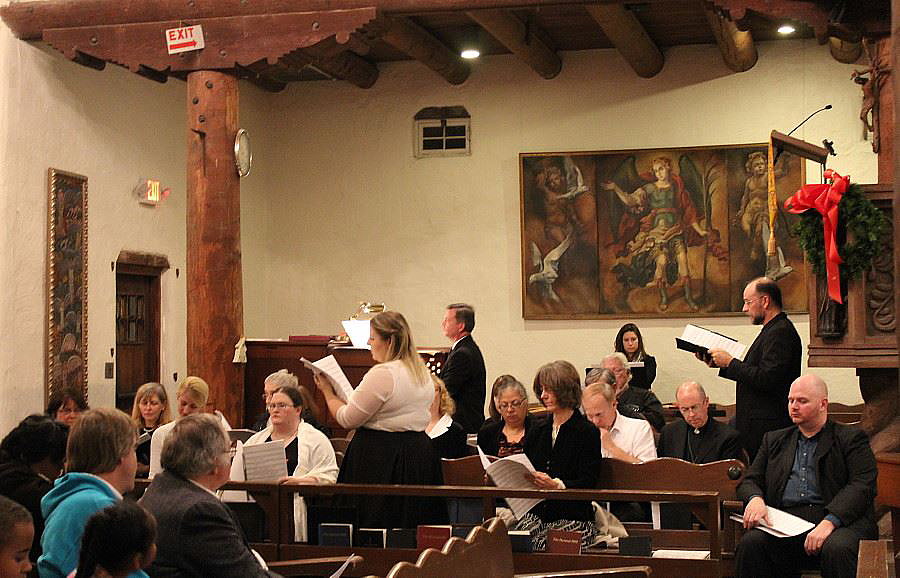 The St. Michael and All Angels Choir sings at the 10:30 AM High Mass on most Sundays, at certain feast day masses, and on other selected occasions. Rehearsals are Thursdays at 7:00 PM and on Sunday mornings. We are always looking for new voices!

Our Director of Music 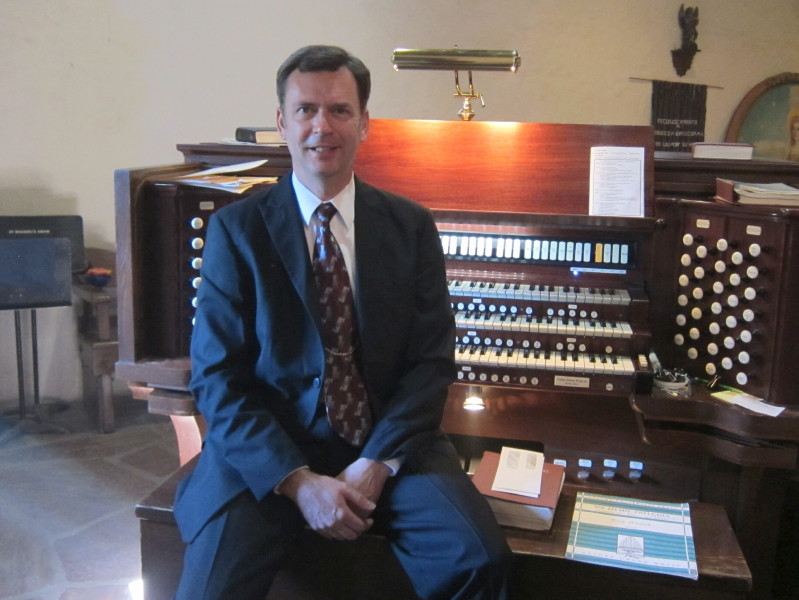 Our Director of Music, Douglas Blair Leightenheimer, obtained his Doctor of Musical Arts degree from the University of Arizona’s Fred Fox School of Music on May 12, 2016. On January 15th, 2016 he presented his doctoral lecture recital, “From Couperin to Vierne: Liturgical and Stylistic Connections between the French Baroque and French Romantic Organ Mass,” at the University of Arizona.

Douglas Leightenheimer is a native of Portsmouth, Ohio, and a 1982 graduate of the University of Kentucky in Lexington. He earned his Master of Music degree in church music from Westminster Choir College in 1984. Doug served as director of music ministries for Venice Presbyterian Church in Venice, FL for more than 12 years. Then, for the fifteen years prior to his arriving in Arizona, he was director of music (organist/director) for First Presbyterian Church in Wilmington, NC. At First Presbyterian, he had extensive experience playing First Presbyterian’s historic 1928 E. M. Skinner pipe organ (Op. 713), an earlier version of St. Michael’s glorious 1959 Æolian-Skinner organ. For the last three years of his tenure at First Presbyterian, he also served as music director for the Schola Cantorum of the Episcopal Diocese of East Carolina.

In mid-2012, Doug left Wilmington to pursue his doctorate at the University of Arizona. Upon the retirement of the church’s previous choir director, Jane Haman, in the fall of 2012, two parishioners recommended the doctoral student as an excellent candidate to fill the position. Doug served as a guest choir director at St. Michael’s, along with several other applicants. St. Michael’s was delighted to welcome Douglas Leightenheimer as its new music director, choir director and organist in late 2012.

A board member of the Southern Arizona chapter of the American Guild of Organists, Douglas Leightenheimer has also served on the executive boards of the Sarasota-Manatee (Florida) and Wilmington (North Carolina) chapters of the same organization, including two terms as dean for each group. He is also a published composer and recitalist. In 2008 he was featured with the Wilmington Symphony Orchestra performing Symphony No. 3 by Camille Saint-Saëns and Symphonie Concertante by Joseph Jongen. In both April 2013 and April 2014, he performed the Mildred Flood Mahoney Memorial Organ Series Concert at the University of Arizona. Recent solo performances include the evensong series at St. Phillip’s Episcopal Church, and the 2015 summer series at Catalina United Methodist Church in Tucson. During UA’s 2016 spring semester, he served as an assistant conductor with the University Community Chorus. 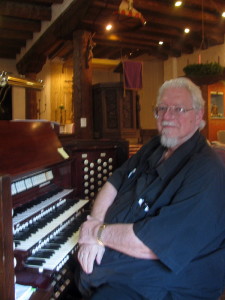 A composer, longtime parishioner, former St. Michael’s music director, and retired English teacher at St. Michael’s School, Alan F. Schultz assisted Douglas Leightenheimer until his death in November, 2019. A loved and respected teacher of English at St. Michael’s School for over 30 years, he trained students in writing, declamation, and public speaking; and provided music for our school masses. Years after his “unconvincing retirement,” he still filled in on the organ, sang in the choir, and occasionally provided new, original music at the High Mass. At the Christmas Eve High Mass in December, 2015, the St. Michael and All Angels Choir performed Carols of the Incarnation, a new Oratorio by A.F. Schultz.

Born in Buffalo, NY, Alan was captivated by music as a toddler, and by the age of 12 was playing music at his local church. Having moved to Tucson in 1958, he graduated from the University of Arizona with degrees in English and music, and was hired to teach English at St. Michael’s School. He subsequently became the organist at choirmaster at St. Michael and All Angels Church, continuing in that role for the next two decades. Later, Alan had an important role in bringing the Æolian-Skinner organ to St. Michael and All Angels over 20 years ago. It is therefore fitting that the organ at St. Michael’s has been named in his honor.

Alan shared his talent of musical composition and performance with the wider community through the Southern Arizona Symphony Orchestra where he remained Conductor Emeritus, St. Mark’s Presbyterian Church, where he was Director of Music from 1986 to 2003, the Tucson Masterworks Chorale (formerly the Tucson Civic Chorus) beginning in 1976, and the Southern Arizona Symphony Orchestra (1980-1995).

Prayers are offered for Delores Schultz, Alan’s wife of 40 years, and their two children, Jeremy and Jennifer. Donations in Alan’s name may be made to the Southern Arizona Symphony Orchestra, the St. Michael’s Music Fund, or Clinica Amistad. 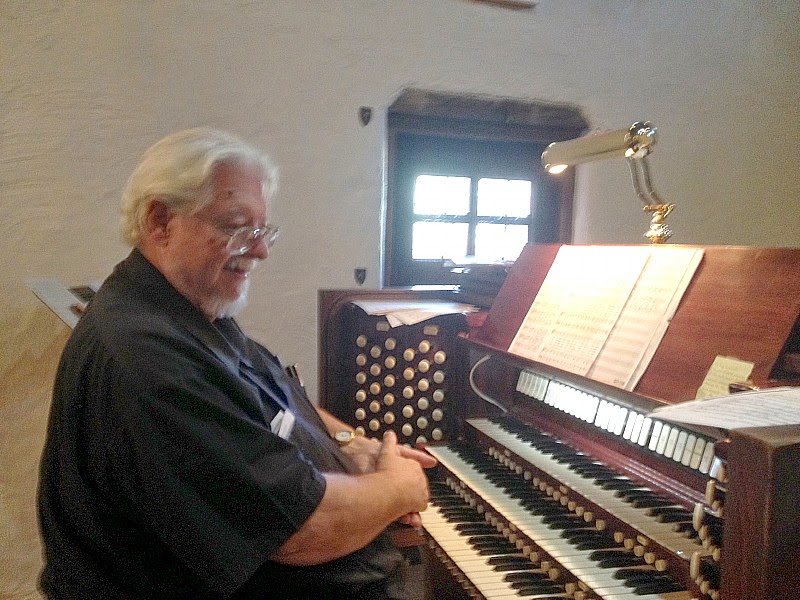 In 2014, our Æolian-Skinner Pipe Organ was recently renamed the A. F. Schultz Organ, in recognition of Alan F. Schultz’s many contributions to St. Michael’s and the Tucson community.

Donations to the Schultz Organ Fund and Endowment are gratefully accepted. Thank you for your generosity! 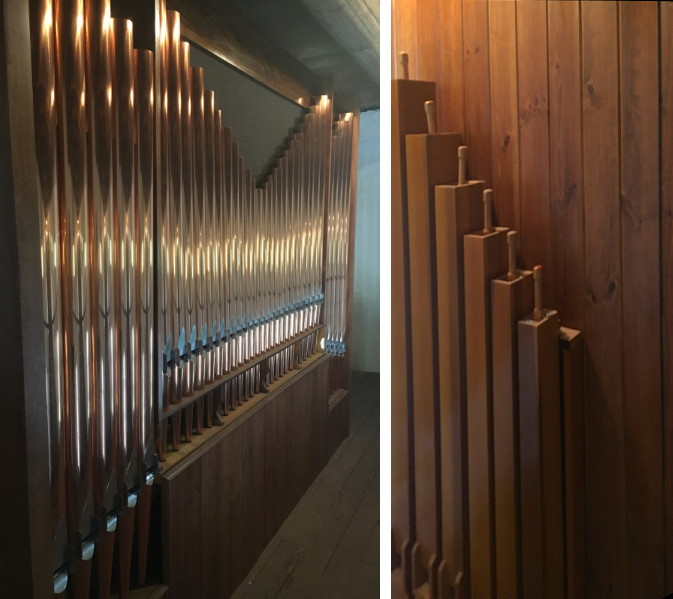 Parts of the antiphonal organ, in the loft over the church entrance.

The Book of Pipes is a memorial and historical listing of loved ones, living and deceased, who have made a difference in our lives, our community, and the world. Your name, or a name of a loved one living or deceased, can be inscribed in the Book of Pipes. Please contact the parish office, 886-7292, for more information. Brochures are always available in the back of the church, or in the parish office at any time. Also to be published is The Stories Behind the Book of Pipes, telling the stories of all the people inscribed.

The name of each person so honored inscribed on a plaque listing the particular pipe that will play forever in their honor and for the glory of God. Entire sections of the organ have been named in gratitude for the larger endowments that have helped to make St. Michael’s acquisition of this wonderful instrument possible.

Proceeds from donations associated with recognition in the Book of Pipes helped us to pay for the Æolian-Skinner Pipe Organ. Now that the organ is fully paid for, Book of Pipes donations benefit the Alan F. Schultz Organ Fund, established in 2014 to defray the costs of maintaining the organ for years to come.

The Savage Writers meet every Tuesday in the Womble Library, where aspiring authors and poets meet for support, critique and encouragement. Several parishioners have published books in recent years.

The Messenger, formerly published as News From St. Michael’s, is our biweekly email newsletter, produced every other Thursday. Each issue generally features a message from the rector, and news on recent developments and upcoming events. News items (especially parishioner activities and achievements) can be submitted to editor Karen Funk Blocher, by email or through the church office, no later that Tuesday on the week of publication. In early 2019, News From St. Michael’s was combined with the church’s print newsletter, The Messenger, which has been published in one form or another since at least 1957. A limited run of print copies of The Messenger is published biweekly for parishioners without computers, particularly those who find it difficult to come to mass.

If you don’t receive our email newsletter already and would like to do so, please fill in the form below: 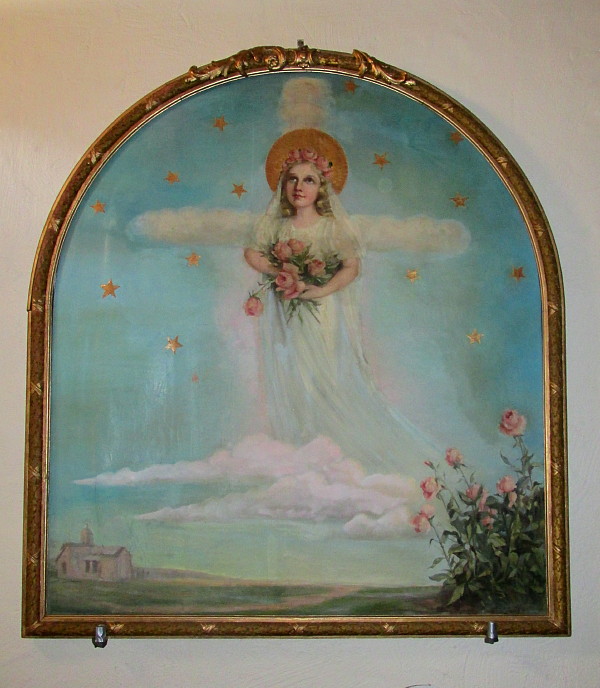 From the Church Office to the Sacristy to the Parish Center, and everywhere in between, one can find a wide variety of paintings, photographs, banners, altar linens, statuary and other examples of the visual arts. 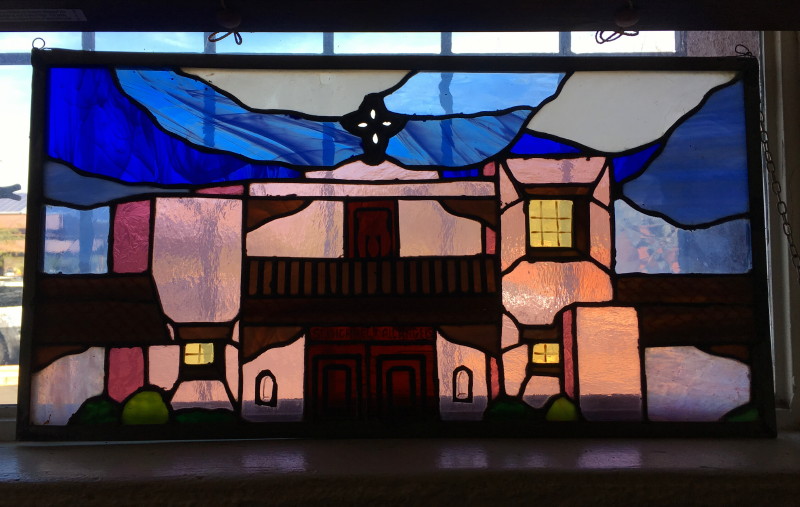 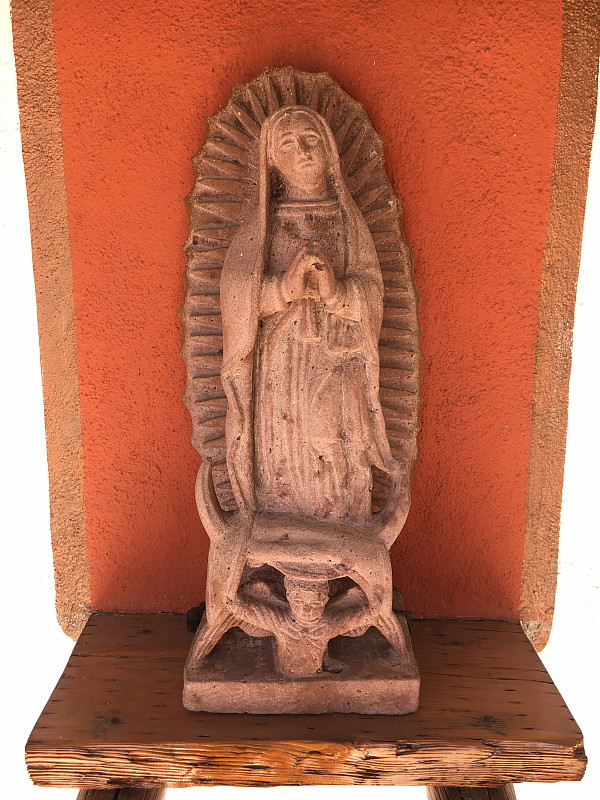 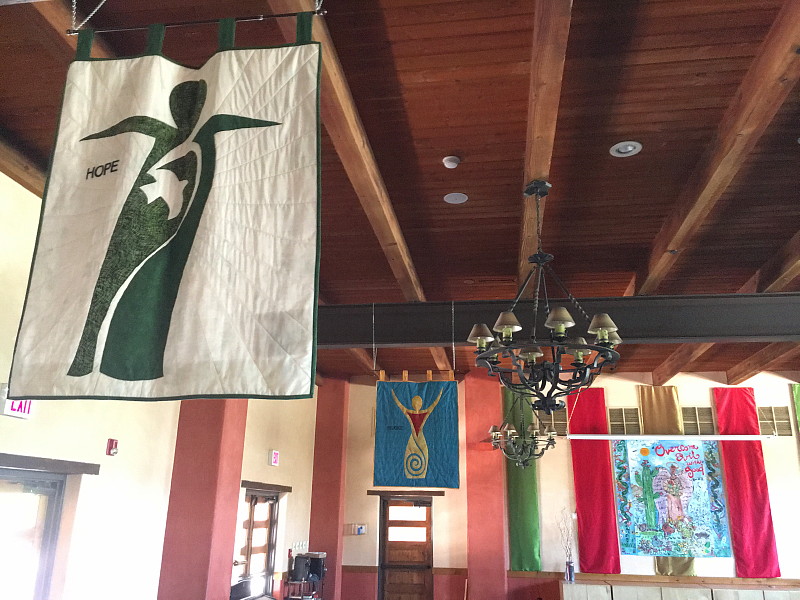 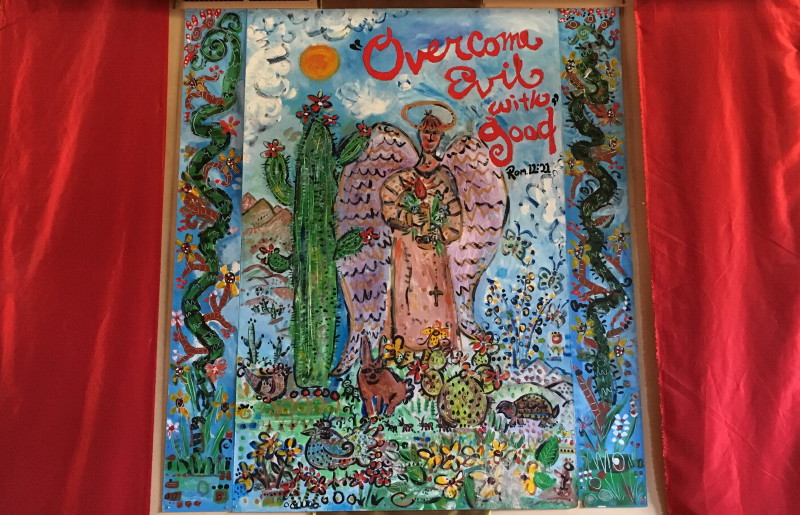 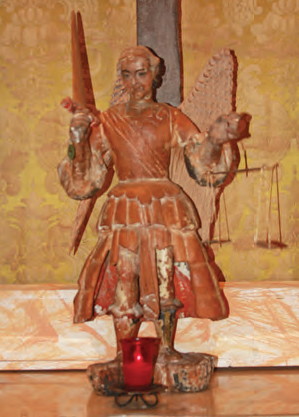 The Art of St. Michael’s